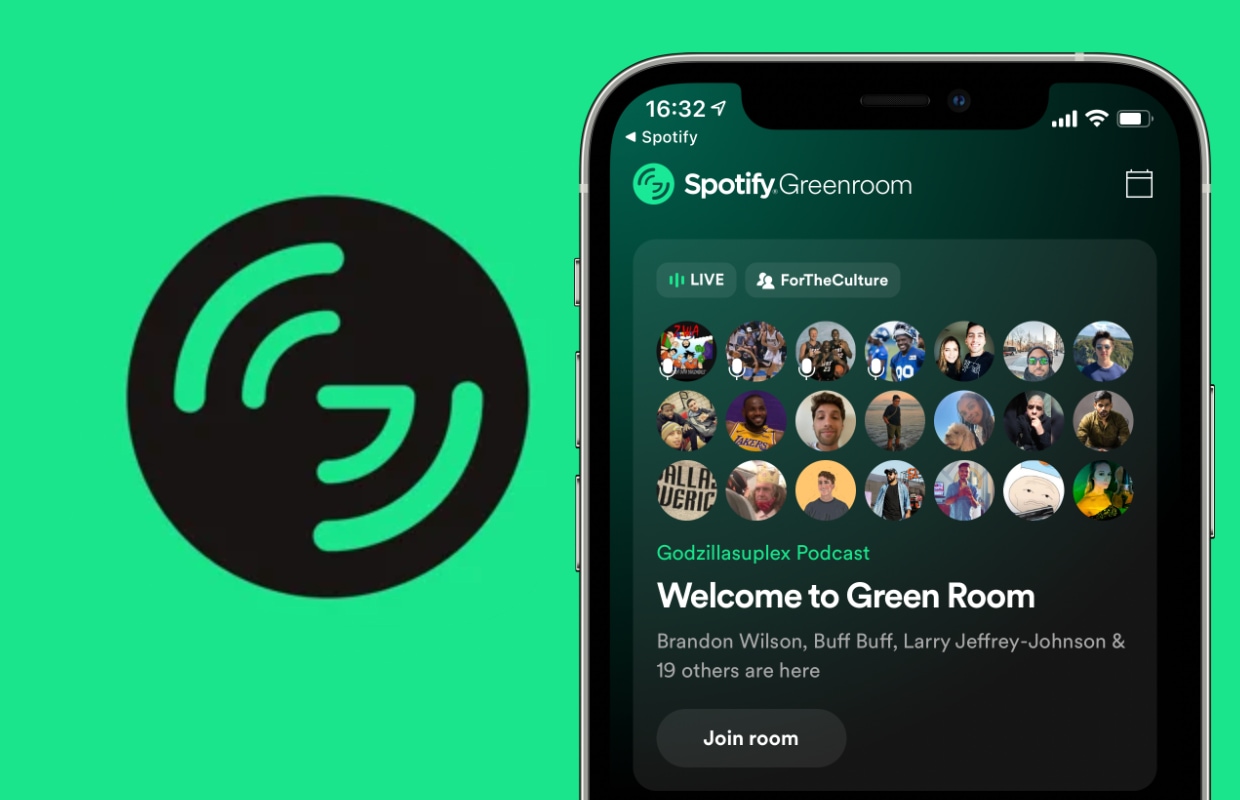 In June 2021, Spotify released a new live audio-only app called Greenroom — empowering artists to engage in discourse and conversations about topics that fans care about.

The app is designed to directly compete with Clubhouse, the invite-only chat app that has taken the social media world by storm. We talked in-depth about how artists can leverage Clubhouse to advance in the music industry here, so make sure to check that out.

But for now, let’s take a deep dive into Spotify’s Greenroom, and discuss how you can use the app to propel your career to new heights.

Spotify’s new app capitalizes on an emerging trend in social media, operating as a space for live conversations to take place in virtual spaces called “rooms.” Within each room, there are three types of “players”:

Anyone using the Greenroom app can serve as a host and create a room. Hosts can go live instantly or schedule sessions through the app’s “Calendar” functionality after selecting a topic for discussion.

Both Greenroom and Clubhouse put a measured focus on networking and impromptu discussions. However, as Greenroom is a newer platform, it doesn’t yet have as many groups or room options as the competition.

Greenroom sets itself apart from Clubhouse in two key ways:

Clubhouse pioneered a new age of access for up-and-coming artists in the music industry. Artists, managers, songwriters, producers, engineers, marketers, booking agents — you name it — they’re all participating in discussions on the platform.

And because Spotify has an inherent focus on music, it’s a sure bet that these same folks will be participating in Greenroom. Even more exciting, many of these people are industry leaders — allowing you to connect with individuals that may have been out of reach in the past.

This may seem obvious, but building up your profile with “gems” and followers can help you to assert yourself as a trusted voice in the industry. By meaningfully participating in discussions, you can get the social proof you need to get people to perk up their ears for what you might have to offer.

Eventually, this could lead to a great opportunity to serve as a host for various discussions. Not only will this make you an attractive candidate for collaboration with other artists, but it will also allow you to build your fanbase and plug your own ventures as part of the discussion.

As an independent artist, it’s tempting to constantly push yourself towards building your fanbase. And while this is indisputably important, taking a moment to kick back with a notepad and listen can lead to long-term pay-offs.

Make a concerted effort to join rooms that genuinely relate to your career goals and aspirations. See what other people are saying, and how it applies to you. Then, with an arsenal of knowledge under your belt, circle back to networking and establishing yourself as a trusted voice.

It’s not often that a big player like Spotify releases a new app. There is almost a guarantee for a robust user base, and a clean slate for new voices to assert their presence.

Unlike Clubhouse that has not yet put forth a plan for creators to monetize on the app, Spotify has indicated a dedication to supporting and rewarding creators for the communities they build through Creator Fund.

As an independent artist, you know how difficult it can be to monetize your music. Exploring different platforms to monetize can allow you to generate revenue that can be kicked back into your primary pursuit of making music — and Greenroom could be one of those opportunities.

Make sure to register for the Creator Fund when you create your Greenroom account to be eligible for payment. If you can grow an audience, you’ll be paid weekly, and you could see a new income stream that revolutionizes your career!

The release of Spotify Greenroom provides a unique opportunity for independent musicians to:

Getting in on the ground floor of Greenroom could lead to big pay-offs, both monetarily and in building your fanbase, for your career as an artist. So create your account, see what people are talking about, participate in conversations, and see where you can fill in the gaps!

Jack Berning is a lyricist and songwriter who specializes in helping up-and-coming artists reach their goals. He also currently works as a Marketing Advisor for Milestone Management and as a freelance writer specializing in the entertainment industry. He lives in Denver, Colorado.